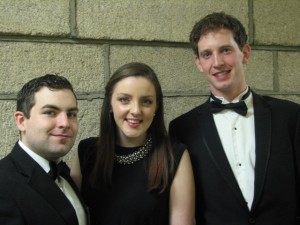 The 2014 Irish Tour of America

On Monday, March 17: Trip to National Seashore on Cape Cod

On Thursday, March 20: Guests at NPDA. The NPDA-Irish debate at Northern Arizona University

On Saturday, March 22:  Tour of The Grand Canyon, 80 miles from Flagstaff

On Sunday, March 23:  Guests at NPDA. Championship final round of NPDA

On Tuesday, March 25: Irish in Arcata. Horseback riding on a California beach; Evening debate on the HSU campus at 7 pm.  Informal reception to follow.

On Friday, March 28:  Irish in Billings. See Mountains of Yellowstone and Beartooth Range, and other sights including ranches and the animals of the West.

On Saturday, March 29:  Irish in Billings. See Mountains of Yellowstone and Beartooth Range, and other sights including ranches and the animals of the West.

On Sunday, March 30: Irish in Billings

On Tuesday, April 1:  Irish in Spokane. Enjoy Spokane.  Activities TBD.  Attend forensics class with Whitworth team and have dinner with team on campus.

On Friday, April 4: Irish in Forth Worth. Known as “the city where the West begins,” Fort Worth offers a uniquely Western experience that we would love to share with the visiting debaters. We propose several outings that will begin with a visit to Fort Worth’s iconic historic Stockyard District. Our visitors will be treated to one of the twice-daily cattle drives amongst shops and restaurants that offer a taste of the old West. The Irish might enjoy a tour of Billy Bob’s, the largest honky-tonk in the U.S. Here, the debaters can tour by day, or return to enjoy local country music and enjoy the Western nightlife. Rodeos are also available for attendance in the Stockyard district every weekend.

On Saturday, April 5: Irish in Fort Worth.

On Tuesday, April 8:  Irish in Miami.

TO DUBLIN. On Wednesday, April 9: Depart for Dublin, Ireland.

Three students from Ireland – two in law school and one in medical school – will travel from Dublin to Flagstaff, Arizona to appear in the annual NPDA showcase debate at 4:30 p.m. on Thursday afternoon, March 20 at the Doubletree by Hilton – Flagstaff.

Dearbhla O’Gorman: O’Gorman, 24, is a first year student at the Law Society of Ireland. She is currently undertaking a Professional Practice course in order to qualify as a solicitor. She completed her undergraduate degree in law at University College Dublin where she was a member of the debate team and represented the university at many competitions including three World Championships. Upon qualification she hopes to work in corporate law and is considering a specialization in litigation.

O’Gorman was raised in Dublin, Ireland. She hails from a family of six, with two brothers and one sister. Both of her parents are Chartered Accountants. Her siblings also have high aspirations; her brothers are studying medicine and engineering, and her sister is training to become a veterinarian.

She makes the most of her free time by spending time with her friends.

“There’s nothing better than getting together with someone you haven’t seen in awhile and having a catch-up and if it’s over great food or a few drinks, all the better,” she says.

She also likes to watch movies, try new restaurants and catch up her favorite television shows.

O’Gorman enjoys debating because of the challenges that it can present.

“Being involved in debating forced me to learn about so many different things,” said O’Gorman. “From world history, politics, international relations theory, philosophy, medical ethics – the list is endless!”

O’Gorman says she most values “family and friends – people to share all your experiences with so you can look back and laugh together!”

This will be O’Gorman’s second trip to the United States.

She previously competed at the US University Debating Championships in Burlington, Vermont.

Her reaction to the win at the Irish Times Final?

“I was absolutely delighted,” she says, “I had previously entered twice, both times reaching the semi-finals so when I entered this time my aim was to make it to the final which in itself would have been an achievement I would have been very proud of.”

O’Gorman also agrees with Siri that there is no consensus on the meaning of life.

“I think everyone has to find their own meaning and purposes,” she says. “Personally, I hope that I’ll always be lucky enough to pursue what makes me happy.”

Kieran O’Sullivan: Kieran O’Sullivan, 25, is in his first year at the Law Society of Ireland and is currently training as a Lawyer, with an apprenticeship at Matheson, one of Ireland’s leading law firms. Kieran intends to become a corporate lawyer and will be working in Matheson’s Corporate Transactions department when he returns from America.

“I plan to make the most of my training and impress the firm that I’m training with in the hope of getting a contract when I qualify.”

O’Sullivan was raised in Sneem, County Kerry, Ireland. His father is a Conservation Ranger for the National Parks and Wildlife Service. His mother is currently pursing adult education. He has two brothers; the oldest is a teacher and the youngest is currently pursuing his Bachelor of Arts degree.

O’Sullivan started debating in high school and is the current chair of the Solicitors’ Apprentices’ Debating Society of Ireland.

“I feel that debating has made me a better and more capable person,” said O’Sullivan. “I have always been clever but all the wits in the world won’t serve you any purpose if you can’t persuasively impart what wits confer.”

He was in disbelief about his win at the Irish Times Final.

“When I was finally certain that we had won I turned to Dearbhla and said ‘That’s us!’ ”

William Courtney: William Courtney, 24, is currently a final year medical student in University College Dublin who has completed a placement in St Mary’s Hospital in London, one of the top trauma centers in Britain, based in London city center.

Courtney says he values his family most in life. He has seven siblings. His father is an obstetrician and gynecologist and his mother is a former nurse, who is now a stay-at-home mom.

Courtney has also volunteered for a summer at a health care clinic in Malawi, Africa, and was co-auditor of the UCD Medical Student Overseas Relief Society in 2013.

He has published four medical papers to date and was a Gold Medal finalist in the University College Dublin Summer student research awards. He is interested in specializing in emergency medicine.

He is “absolutely delighted,” about his win at the Irish Times Final. This is just one of Courtney’s many debate successes. Courtney won the Gold Medal for senior debate in his high school, came runner up in the Irish College of Psychiatry All Ireland public-speaking competition, and received the Silver medal from the University law society for impromptu debate.

Outside of the debate chamber, William played in the All Ireland Rugby football final in 2011 and was voted player of the year.

Overall Courtney places a high emphasis on being happy in life.

“The meaning of life is to be happy in yourself. Focus on the positive people around you rather than the negative ones.”