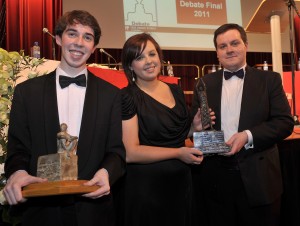 The 2011 Irish Tour of America

On Monday, March 14: Irish in Oregon

TO COLORAO. On Tuesday, March 15: Irish in Oregon, travel to NPDA in Colorado Springs.

On Thursday, March 17:  Guests at NPDA

On Thursday, March 24:  Irish in Alaska.

On Friday, March 25: Irish in Alaska.

On Saturday, March 26:  Irish in Alaska.

On Thursday, March 31: University of Miami.

Aine Hartigan: Aine (pronounced Anya, rhymes with Tanya) Hartigan, 23, is a second year diploma student in the Honorable Society of Kings Inns who has one more year of study prior to qualifying as a barrister-at-law.

She studied for her undergraduate degree in UCD – majoring in English and Philosophy.

After schooling, she plans a career as a barrister

She was raised in Celbridge in county Kildare just outside Dublin.

Her dad has been a vice principal, as well as an English and history teacher.

Aine’s mom was a math/business/Irish teacher for many years but is now an art history masters student. Her brother Eoghan, 19, is a history student in Cambridge

Aine’s hobbies beyond debating include reading, travelling, cinema and music.

Aine has been debating since she was 15, in secondary school. It’s a hobby which she continued throughout her time as an undergraduate in UCD in the Literary and Historical society.

Her major debating success was winning this year’s Irish Times Final. She was also a UCD James Joyce Maidens Finalist. She represented UCD in the European championships in Istanbul and the Worlds debating championship in Thailand. She was named the best speaker in the UCD novice IV.

“Spending New Year’s Eve in Thailand at worlds was an incredible way to ring in a new year!” she recalls.

As for hobbies, she has many.

“I love reading, cinema, eating out and spending time with my friends!”

Aine has only visited the USA once in 2009 when she spent a week in New York.

“This is an unbelievable opportunity to see so many diverse and different places in the USA!

Not surprisingly, she was thrilled to win the Irish Times Final.

“I am absolutely over the moon to have won the Irish Times Final,” she says. “It’s so humbling to see the list of people who have won it over the last 50 years. It’s hard to believe my name is going to be on the trophy with some of Ireland’s household names!”

Aine is drawn to debating for lots of reasons.

“Debating really encourages you to think on your feet and to formulate concise and entertaining arguments,” she says. “I think it’s a great skill to have, especially if pursuing a legal career. I’ve met some of my closest friends through debating and that’s something I’ll always be thankful for!”

And what’s most important to Aine? Hint: It’s not debating.

“The things I value most in life are my boyfriend David, my friends and my family,” she says.

She says her friends describe her as “friendly, warm and outgoing.”

“I like to use my free time to catch up with friends and family. To be honest, between work and study I don’t have much free time so I think there’s no greater luxury than having absolutely nothing to do!”

Lorcán Price: Lorcán (pronounced Lor-Con) Eoghan (pronounced owe-en) Price, 25, is a final-year degree student in the Kings Inns Law School who next plans to study for a Masters Degree in Commercial and European Law in Trinity College Dublin or in London.

After schooling, he plans a career as a barrister.

He was born and raised in Galway in the west of Ireland on the Atlantic coast. His father is a retired executive from Telecoms Company. His mom is a stay-at-home mom.

His sister, 22, works with disabled children as a therapist in Dublin.

Lorcán is keen angler and enjoys sea fishing off the west coast of Ireland. He also enjoys hiking and shooting.

Lorcán has volunteered for Habitat for Humanity, and traveled to Ghana with the Charity to build houses in 2008. He has worked with young people as part of a church youth group.

Lorcán is politically active in the former governing party Fianna (pronounced Fee-Na) Fáil (pronounced Foil). He is a former member of its national executive.

Lorcán has been debating for six years.

Modest by nature, he tends to remember the slips rather than the victories.

“My most memorable Irish Times moment was at the start of my speech toppling my glass of water all over the podium in the Semi-Final – and, in the process, soaking my notes and damaging a computer,” he says. “And all that in a debate about leaks and wikileaks!”

“I was absolutely delighted to play a part in discussing and engaging with this topic (about the financial health of Ireland) and I hope that we in some small way we contributed to the ongoing public debate on the financial crises in Ireland.”

Not surprisingly, Lorcán is looking forward to his first visit to the states.

“The Irish have a very deep affinity with the US, we see it as a place where generations of our forefathers have, in the pursuit of happiness and freedom, played their part in contributing to the fabric of American society. In many ways Ireland has and always will be closer to Boston than Berlin, so naturally I was delighted to have the opportunity to travel across the country and experience the famous American hospitality.”

Above all else, Lorcán says he values “friends and family.”

“When all else is cast aside, these are the only things that matter,” he says. “I spend my free time judiciously on friends and family. It’s too valuable to spend on anything else.”

And what’s he most looking forward to as his visit to America approaches?

“Meeting Americans of course, and being bought a drink (or even two if I am feeling uninhibited) on St. Patrick ’s Day!”

My name is Mark Thuillier. I’m 23 years old. I studied law as an undergraduate in Trinity College Dublin and as a result of a scholarship, I opted to pursue a masters in Irish history (with a particular focus on the 1641 Rebellion and the Irish Civil War).

I plan to become a barrister, but I’m not sure whether I’ll practice in Ireland or England – the million dollar question occupying my mind at the moment!

I was raised in Drumcondra, in the Northside of Dublin. I spent my Erasmus Year in Finland in 2008 (an incredible experience, with plenty of travel) and would love to live in another Scandinavian country in the near future.

My father is a teacher and my mother is a receptionist in a care centre for the elderly. I have two older brothers, Anthony, 28, and John, 26, both of whom are currently living abroad. Anthony is teaching in Dresden and Berlin, while the John is working as an accountant for KPMG in Canada.

My two greatest interests are reading (predominantly history, literature and current affairs) and playing football – I’m a big Arsenal fan and have played for local teams since early childhood. I love meeting new people, going to the cinema (preferably arthouse or classics), squash, (racket-ball as I think Americans refer to it), tennis and travel are all things I enjoy.

I’m an active member of the Vincent de Paul Society, an organization to help people from disadvantaged backgrounds. I help out at a Refugee centre in town, visit the elderly, play football and help children improve their literacy skills.

I used to be quite politically active, but have become more disillusioned with mainstream Irish political parties since 2007 – normally the reverse occurs in college.

I did a lot of debating in school, winning the All Ireland Championship in 2005. When I came to college, I participated in events in the first term, coming runner-up in the First Year debating competition. I decided to spread my wings in Trinity and participate in other activities. As a result, I didn’t debate much, aside from entering the Irish Times. I was attracted by its illustrious list of former winners, its prestige and the fun of crafting arguments with a good friend.

We were three times semi-finalists, but finally cracked that chestnut this year. The semi-final debate was a highlight – I was the last speaker and had plenty of Hugo Chavez related jokes (the motion was on whether we should vote for him), not to mention the atmosphere of the Grand Final on February 18th, a tremendous occasion.

I also participated in the Moot Court (mock trials) in Trinity, winning the College Final in 2010 and appearing before the Irish Supreme Court where I was a runner-up.

Like most of my countrymen, I love visiting America.

In 2005, I was selected to represent Ireland at a Future World Leaders’ Summit in Washington – my first exposure to the USA and one which was overwhelmingly positive. I returned to visit friends in New York, Washington, Philadelphia and Boston in 2008 and I’m relishing the chance to spend time in each of our destinations.

Reaction to the approaching trip: “Trip of a lifetime! I hadn’t really considered the prize for winning, so to be given such an incredible list of destinations was a delightful shot in the arm.”

Why does he like debating?  “I love the exchange of ideas, developing arguments and becoming more informed about a variety of international affairs; it’s what college is about!”

What do you value most in life? “Simple: family.”

And how would his friends describe him? “Out-going, happy, a fan of the obscure, one hell of a dancer, an Irish Cesc Fabregas.”

What’s he looking forward to most in America? “Meeting our hosts, touring throughout parts of America that I had only previously dreamed of exploring and developing what I hope will be lasting friendships.

“I can’t wait to arrive and meet everyone! It promises to be an unforgettable trip! Thank you in advance for your hospitality.”