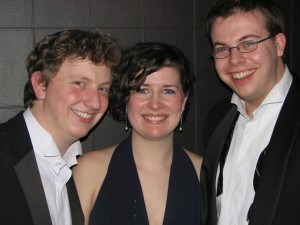 The 2009 Irish Tour of America

TO DENVER. On Friday, March 20, David and Jeremy fly from Dublin to Denver. Host Robert Margesson.

On Saturday, March 21: the Irish will have breakfast with Dr. Robert Margesson and members of the Regis debate team. Early Saturday afternoon, the Irish will drive to the Sol Vista Basin ski resort and spend the night.

On Sunday, March 22: Andrea flies to Denver to join the boys. The Irish will spend Sunday skiing at the Sol Vista Basin ski resort.

On Monday, March 23: the Irish will return to Denver. They will spend the afternoon meeting with campus dignitaries. Monday night, the Irish will enjoy a dinner with members of the Regis debate team and other invited guests. A public debate is scheduled in the science amphitheater at 7 PM Monday evening. After the debate, the Irish can return to their hotel or spend some time taking in the Denver nightlife.

On Wednesday, March 25: The Irish will have the opportunity to tour beautiful Anchorage, Alaska, followed by a public debate in the evening.

TO CALIFORNIA. On Thursday, March 26, The Irish will be at Stockton, California for the national championships hosted at the University of the Pacific. Host Brent Northup, NPDA, and Marlin Bates. The Irish will stay at the Stockton Grand/ Hilton.

On Friday, March 27: The Irish will be featured in the annual American/Irish public debate at the opening assembly of NPDA Nationals at 4 p.m. at the Stockton Grand/ Hilton.

On Saturday, March 28, the Irish will spend the day with University of Pacific team. Events to be announced.

Sunday, March 29, and Monday, March 30: The Irish are guests at the American national championship tournament.

IN CALIFORNIA WITH PACIFIC TEAM. On Tuesday, March 31, The Irish will stay with the University of the Pacific team. Host: Marlin Bates.

TO MIAMI, On Tuesday Night, March 31 (just past midnight/technically April 1), The Irish will fly from California to Miami, Florida. Host: Dave Steinberg

On Wednesday, in Miami. Recover from red eye flight to Miami.

On Thursday, April 2: Irish will debate with the University of Miami and possibly an on-line debate with We The Students.

On Friday, April 3: The Irish will have a debate at Miami Dade College. In the evening, exploration of Coconut Grove.

On Saturday, April 4: At their pleasure, and dependent on weather and time: the beach and/or Everglades National Park

Cultural Experience:  Live out the Spring Break dream of every American college student.  Get a sunburn to brag about back home…

TO TEXAS: On Sunday, April 5, The Irish leaves Miami for Lubbock, Texas. Host: Joe Gantt. The Irish will arrive in Lubbock, TX and enjoy a small social gathering.

On Monday, April 6: In the morning, the Irish will tour Carlsbad Caverns and in the evening there will be two debates, one against Texas Tech and one against Wiley College.

TO DUBLIN: Tuesday, April 7: Irish will head for home.

“I like to win. Not the argument necessarily, but the affection of those present.” David Hopkins, Trinity College Dublin

Ireland has crowned its debating champions for 2009. A future lawyer, a future teacher and a future civil servant will oppose three top American debaters in a Friday, March 27, public debate that precedes the start of the NPDA national tournament in Stockton, Calif.

The winning Irish debate team and the top individual in the Irish Times Debate Final were crowned on Friday night Feb. 20 on the campus of the University of Limerick.

The winning team was the team from Trinity College was Andrea Mulligan and John Gallagher. The winning individual was Jeremy Kinsella of University College Dublin.

Since academic obligations prevent Gallagher from making the trip and because he enjoyed the tour last year, Gallagher has stepped aside for David Hopkins of Trinity College, the runner up individual this year.

Andrea Mulligan: Andrea Mulligan, 22, is in her final year as a law student at Trinity College Dublin. She plans a legal career as a barrister. She has been awarded a Fulbright Award to earn her Masters of Law, LL.M. at Harvard University.

Raised in the Dublin suburb of Castleknock, Mulligan has debated for six years, reaching the Irish Times Final twice before in 2007 and 2008 before winning this year. She has been a winner in numerous other debate events held in Galway, Istanbul and Dublin.

Asked to describe herself, Mulligan, daughter of a teacher and an accountant, says that she spends far too much time drinking…tea!

“And I love to chat with my roommates. I love music and singing and I volunteer at a charity called Friends of the Elderly.

“Traveling is probably my greatest passion. I traveled across South America with three close friends and had some of the strangest and most exciting experiences of my life. I also enjoy reading, going to comedy gigs, and really love shopping- I hope to do a lot of it in the US!”

“I’m blunt, passionate, honest and very loyal,” she says. “The most important thing to me is friendship – and the thing I enjoy most in the world is good conversation.  Especially if it takes place around good food! I love meeting interesting people and I’m confident the US trip is going to give us the chance to do that.”

Mulligan is proud to be representing Ireland.

“Ireland has a very long a proud tradition of great oratory so I hope we do that justice,” she says.

She can’t wait for the trip to begin.

David Hopkins: David Hopkins, 22, is also in his final year at Trinity College Dublin where he is currently studying for a postgraduate diploma in education, having completed his English and History degree two years ago. He is preparing for a career teaching secondary school. He already has an offer to teach in a community school next year.

“From the time I was a child myself, through to my work in the National Children’s Office, I have always had an interest in the issues that affect young people of all ages,” he says. “Now, as a secondary school teacher, I will make that my professional endeavor. I hope that my contribution, in whatever capacity will have affected those that I have worked with for the better.”

Hopkins says he received some unusual encouragement from a teacher who was trying to guide his career choice.

“One of the older teachers took me to one side and said, ‘Don’t worry Dave, this is the best job in the world – it’s like being a dictator of a really small country…’ I would love to tell you that this was a great comfort to me, or even that elements of what he said were true…but I honestly haven’t thought too much about it, other than the fact that it was a German teacher who told me.”

Hopkins has reached the semi-finals of the Irish Times competition three times, before finishing as the runner-up in his fourth attempt. He’s been a National Mace finalist.

He loves debating for lots of reasons.

“Superficially, because it affords me the opportunity to go on all expenses paid tours of the States,” he says. “Beyond that, because rhetoric can make fools of the informed.”

Son of a teacher and a special needs assistant, Hopkins also grew up in Castleknock, outside Dublin. He has two younger brothers, twins, who excel at debating, soccer, Gaelic football and piano.

Hopkins was an Irish student representative for an International conference in the United States. He was chair of the National Youth Parliament, and was part of a team that won a provincial soccer competition!

“I like to moan about not having enough free time as I whittle away days playing Fifa or watching ‘West Wing,’ ” he says. “On more constructive days I enjoy watching or playing any sport known to man, from curling to elephant polo, or watching films with my girlfriend.”

And what values guide David?

“Well, you’ve got to be busy to get anything done,” he said. “And I’ve realized that if you ever have to find your feet, you can listen to those around you but you have to in the end find that space yourself.”

He’d love to beat the Americans, but he takes a more philosophical view of the occasion.

“I’d like to win,” he says. “Not the argument necessarily, but the affection of those present.”

Jeremy Kinsella: Jeremy Kinsella, 23, is in his final year studying politics at University College Dublin. He is studying philosophy and is currently working on a masters in political theory, so he expects he’ll be a civil servant. He intends to apply to embassies and the foreign affairs office “for hopeful employment.”

Kinsella has debated for five years, reaching the semi-finals twice and the finals once. He was a finalist at the Cambridge competition, the Irish Mace debating competition and the Irish National Law Debates.

He says he likes arguing, winning and “hearing the sound of my own voice.”

“I love the sense of power, the fact that everyone in the room is listening to you,” he says. “The ability to speech to a crowd and try and engage with them and empathize with you. The ability to convince people who are willing to be convinced and the general buzz and enjoyment of thinking and speaking in public.”

He credits his family for his debating success.

“My dad likes to think I got my debating talent from his as we debate everything in our house and have regular family discussions and debates. These are obviously very casual.”

Kinsella has lots of ways to fill free time.

“I’m a fanatic soccer fan and love Tottenham Hotspur fc!” he says. “I love movies and have a DVD collection of over 300 movies! I also love my Playstation 3 and gaming and all the usual stuff with my friends and having a few drinks and just spending time with the people I love. I’ll chat to anyone and love comedy! Anything by Ricky Gervias is simply sublime and would keep me laughing for hours.”

When asked to describe himself, the subject keeps coming back to friends.

“I’m a genuine, and really easy going! I really love my friends and really love college more for them then the education and academic aspects, I couldn’t think of anything better than an evening in with all my mates a few drinks and a movie and just having general banter. It’s the little things.

“College and things just end up stressing me out with workloads and deadlines but at the end of the day if you’ve good friends and family any problems are insignificant!

“To be honest it’s quite difficult to describe myself. I’m the kind of guy who’s a pretty open book and after a couple of hours with me you’ll know exactly what I’m like! I love a good time, I’m a nice guy and I’m always looking to have fun and make new friends and have enjoyable experiences!”